THIS IS A MOSTLY SPOILER-FREE REVIEW.
The one spoiler mentioned is at the very bottom
of this post and is clearly indicated. 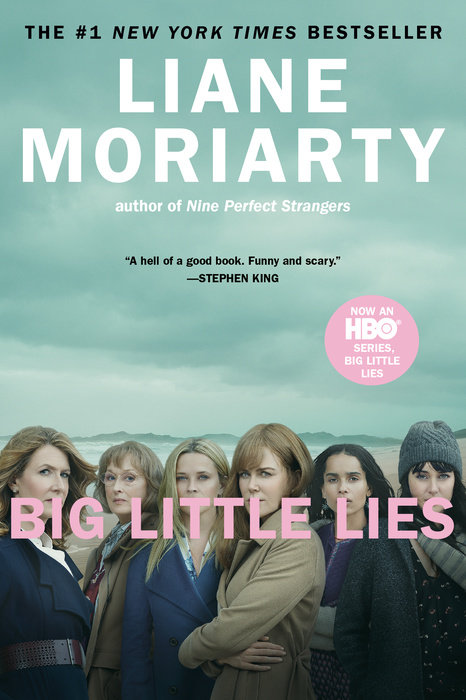 Big Little Lies follows three women, each at a crossroads:

Madeline is a force to be reckoned with. She’s funny and biting, passionate, she remembers everything and forgives no one. Her ex-husband and his yogi new wife have moved into her beloved beachside community, and their daughter is in the same kindergarten class as Madeline’s youngest (how is this possible?). And to top it all off, Madeline’s teenage daughter seems to be choosing Madeline’s ex-husband over her. (How. Is. This. Possible?).

Celeste is the kind of beautiful woman who makes the world stop and stare. While she may seem a bit flustered at times, who wouldn’t be, with those rambunctious twin boys? Now that the boys are starting school, Celeste and her husband look set to become the king and queen of the school parent body. But royalty often comes at a price, and Celeste is grappling with how much more she is willing to pay.

New to town, single mom Jane is so young that another mother mistakes her for the nanny. Jane is sad beyond her years and harbors secret doubts about her son. But why? While Madeline and Celeste soon take Jane under their wing, none of them realizes how the arrival of Jane and her inscrutable little boy will affect them all.

At-a-Glance Review: Big Little Lies has a lot to like about it in terms of characterization, format, mystery, suspense, twists, and cleverly tying it all together. It loses a star for its lack of diversity and representation.

I received a copy of Big Little Lies from my mother-in-law, Anne, after she finished it during her visit here in May. She read it during her three-week stay and raved about how she couldn’t put it down, and then she left it for me to read when she and her husband, Ray, left for home. I had also heard good things about the HBO limited series based on this novel.

Despite the thumbs-up reputation preceding the novel, I was skeptical. I primarily read young adult and/or fantasy novels, and mysteries/thrillers are totally outside my comfort zone. However, I am trying to branch out and read more (and more often). I had the book, it sounded good — so, this was first on my list for my TBR Bingo challenge.

I started it on a Saturday afternoon, got up early on Sunday because I couldn’t stop thinking about it, and I took it to work with me through the week. I couldn’t put it down.

The three main characters are intriguing from the start, the drama — set around a seemingly small beach town in Australia — is hooking and believable, the side characters have distinct personalities and relations to the protagonists, and Moriarty does a great job of revealing just enough information as the plot develops to have had me guessing and wondering.

The format is interesting and works well for this story. The narrative is occasionally broken up by quotes from side characters, and the quotes help push the plot along and give clues about what’s happening between the lines of what the reader sees. The alternating points of view are not jarring, so I quite liked them.

My biggest critique with Big Little Lies is the lack of racial diversity. Not only are the three protagonists white, none of the other characters give any indication that they’re POC. Other than the hair colors and styles of the protagonists, we only get physical cues of the minor characters when they’re tied to the characters’ in a way that says something about their personalities (i.e. the Blonde Bobs). (Defaulting to whiteness is a personal bad habit that I’m working on. However, the book cover also features the three white actresses from the tv show, and there are no indications toward POC in the novel.)

I also don’t like the way the one gay character is treated in the end. His ending was kind of cute but unnecessary (and pandering to romance seekers). More of my take on this can be found at the bottom of this post under SPOILER AHEAD.

Aside from the lack of representation and the mistreatment of the one gay character, I really did enjoy Big Little Lies and do recommend it if you like drama and mystery. I will probably read more of Liane Moriarty’s work once I finish my TBR Bingo challenge.

CONTENT WARNINGS (Please note that because this story is a mystery, the list of warnings can be considered spoiler-ish.)

Have you read Big Little Lies?
What are your thoughts on the ending?
Were you surprised by who did it and to whom?

If you want to chat about this in the comments, please
mark your comment as containing spoilers if it contains spoilers. xx

SPOILER AHEAD (or My Continued Thoughts on the One Gay Character)

Tom, the owner of Blue Blues and the only gay character in the novel, turns out to be straight. And he likes Jane. It’s cute, okay sure, we all want our protagonists to be happy. But Jane could have found that happiness with someone else. We could have been left with the knowledge that she was healing and would eventually find love. It didn’t need to all be wrapped up explicitly in the text. Tom could have been gay and a great friend, and that would have been fine.

Hiya, I’m Kaiya! I’m 25, a young professional in the advertising world, and I’m trying to do something with my English degree. I blog about my life and the bits in between: books, products, mental health, and travel.